"The Grid. A digital frontier. I tried to picture clusters of information as they move through the computer. What did they look like? Ships? Motorcycles? Were the circuits like freeways? I kept dreaming of a world I thought I’d never see. And then, one day, I got in." — Tron: Legacy

This time this blog post is in English. I decided to change language when I saw link to my blog at Seaside.st. The other reason is that Google's translator just sucks. I hope to suck less.

Post 4 is the last post from the series about HTML parsing and presenting results in form of a web page using Smalltalk and Seaside. All these posts about Smalltalk were my attempt to find out for myself what this language is really about. A year ago I didn't even know about it's existence. My programming world till that time was wrapped mainly in C/C++ and Java. So I thought I'll try some of it in action and that the best way to grab a bit of it is to try it in practice and to solidify that experience on a blog. Well, actually Smalltalk was the main reason for this blog to show up. At the same time I also found Clojure. Both of these as languages just blown my C/Java mind away. Smalltalk is impossibly simple language and has a very helpful IDE (a REAL IDE not just some editor with syntax highlighter and fancy keyboard shortcuts that spit out code or strictly said: vomit code at you). Seaside is also one of the most brilliant ideas I've seen. To efficiently build apps with Seaside actually all you need is a basic knowledge of HTML and CSS and surprisingly no JavaScript - I didn't need it through the whole creation process. Less is better. ;) I find the idea about Smalltalk application image far superior than Java libraries and whats more, easier way to share applications than using jars. For example, I don't have to do anything with my application if I want run it on Android - just copy and run ( thanks to this project: http://code.google.com/p/squeakvm-tablet/ ). Can you do it in Java? You can't!

So lets get back to play. Last time I left, my blog comments reader was in the state where i had to manually add entries to collection, comments were looking ugly, there was no way to remove entry form collection, etc...

This time I wont show any code here (as a text). I decided to share whole one-click Pharo image where you can experiment with. Ill just describe what my objects do. 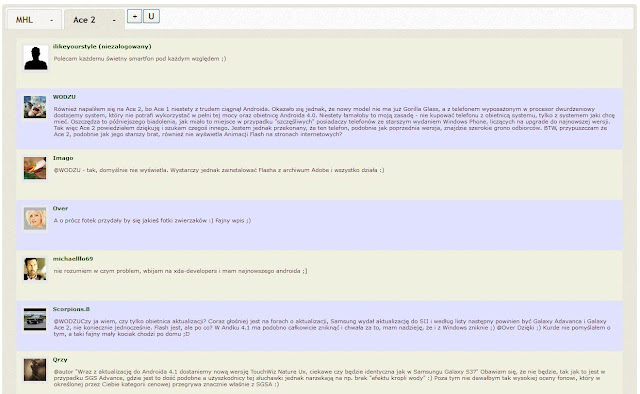 Well, at least it is not as scary looking as last one...

The minus sign removes entry , + button displays DPDialog, and U button updates comments.
DPDialog looks like this: 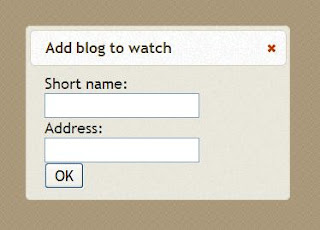 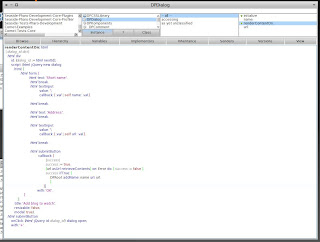 A you can see its a jQuery dialog, simple, nothing fancy. Code under submitButton checks if user entered a valid URL (its valid if it can be read from). If its OK then DPRoot class adds blog entry to its internal list and then tries to parse comments from given URL.

Here is the graphical description of how tabs bar is created: 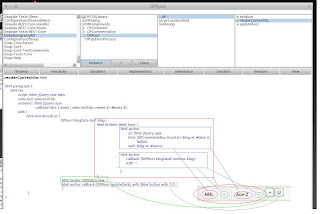 This method checks if its instance variable (DPComments object sets it when creating new DPComment) is false or true naming div element accordingly, so its later possible to apply a proper CSS code.